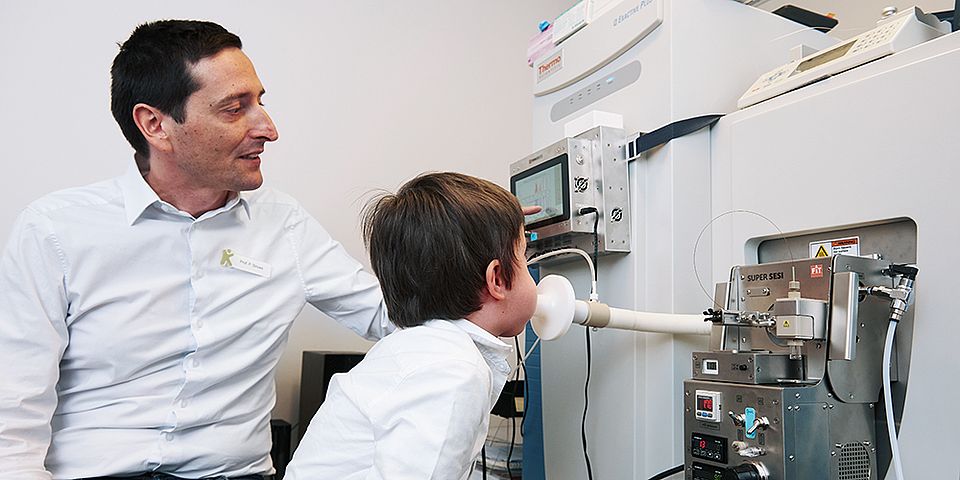 This special apparatus prepares the exhaled breath so that a mass spectrometry device can distinguish minimal traces of substances. (Image: UKBB)

A person’s exhalation reveals their personal metabolic profile. Researchers at the University Children’s Hospital Basel (UKBB) are investigating how this information can be used to diagnose and monitor particular illnesses.

Unbelievable but true: A single puff of breath contains large amounts of information that could potentially be used to diagnose and treat illnesses, namely tiny but measurable traces of volatile substances. Such chemical “breath prints” have the potential to provide insights that otherwise could be derived only from blood or urine or would be altogether elusive. For instance, it can reveal how our body breaks down and converts substances, how our lungs work and what differentiates us from others in terms of our metabolism. Exhaled air contains typical telltale signs of microbial lodgers, which in future could indicate illnesses such as pneumonia.

Breath profiles could be used for noninvasive disease monitoring. The procedure is as easy as breathing: Instead of being repeatedly pricked with needles to have blood samples taken, patients need only to blow into a little tube. This is a blessing, especially when treating children. In comparison to diagnostics using blood or urine, breath analysis needs no sample preparation. The fact that the information sought is then available nearly immediately makes the method particularly attractive from a clinical perspective.

The final step, however, has yet to be taken: The treasure trove of information hidden in exhaled air still needs to be unlocked and reliably interpreted. Among the trailblazers is Professor Pablo Sinues, Botnar Research Professor of Pediatric Environmental Medicine and member of the Department of Biomedical Engineering at the University of Basel. A pioneer of mass spectrometry analysis of volatile organic compounds in exhaled air, the 42-year-old Spaniard has been involved in developing the necessary high-sensitivity apparatus from an early stage: “We are trying to develop new tools and methods to address unmet clinical needs like for example rapid and accurate diagnosis and therapeutic monitoring.”

Sinues, who studied chemistry and mechanical engineering, is convinced that this surprisingly underexplored field has a bright future. Basel offers him privileged opportunities in that the University Children’s Hospital Basel allows him and his team to conduct first-hand research with young patients while maintaining close contact with the attending physicians.

As sensitive as a dog’s nose

Analyzing exhaled air is quite challenging. The tools used need to be sufficiently sensitive and specimens have to be fed into the measuring device in the right form and in real time. Basel recently saw the arrival of a combination of equipment that is sensitive enough to detect molecules of relevant organic compounds and is ready for clinical use.

Sinues was already involved in developing such highly sensitive apparatus as a visiting doctoral student at Yale University, working in the former laboratory of Professor John B. Fenn, who was awarded the Nobel Prize in chemistry in 2002 for his contributions to mass spectrometry. Eight years ago, Sinues moved to ETH Zurich, where he continued to develop these technologies and conduct pilot clinical trials. After completing his postdoctoral thesis in 2015, Sinues, a co-holder of two relevant patents, became Botnar Research Professor at the University of Basel two years ago.

At the heart of the apparatus, which was recently installed at the University Children’s Hospital Basel, is a specialized device. It prepares the exhaled breath in real time, enabling the commercially available high resolution mass spectrometry device to distinguish downstream minimal traces of substances, measured in parts per trillion, according to their molecular weight. Only a dog’s nose has the same extremely high level of sensitivity.

A “breath print” takes the form of peaks in the mass spectrum, representing the presence of specific substances in breath. Because the technique is real-time, the presence of such molecules is monitored on the fly. Thousands of substances may be present, which leads to a mountain of data. For the method to work, exhaled molecules need to be electrically charged or ionized. This is achieved by combining the exhaled breath and an electrospray. Accordingly, the method is known as secondary electrospray ionization with high-resolution mass spectrometry, or SESI-HRMS. Sinues was involved in developing the device that is fundamental to the method. The device is currently marketed under the name SUPER SESI by a former postdoctoral researcher of Sinues at ETH Zurich and produced by a company founded in Spain.

The challenge now is to prove conclusively that measurements obtained are repeatable and reproducible. This means developing standard procedures for routine use of breath analysis. In this connection, Sinues, along with other researchers, published a seminal technical paper in the spring of 2019. Meanwhile, the repository of data such as mass spectrometry peaks and associated information is growing with each puff of breath analyzed and is waiting to be interpreted.

15 minutes instead of 48 hours

According to Sinues, SESI breath analysis will also find applications in therapeutic drug monitoring where the correct dosage is difficult to determine. Drugs used to treat epilepsy or cancer, for instance, have a narrow therapeutic window, that is, the margins separating ineffective, effective and toxic dosages are very small, not to mention the wide variability from patient to patient. To enable safe, personalized treatment, series of blood samples need to be taken. Sinues is currently working to replace the use of needles with noninvasive breath analysis, which would be a huge relief, especially for children. Instantaneous results also represent an unbeatable advantage, with no need to wait for news from a laboratory. The aim of making life easier for younger patients is very much in keeping with the ethos of the Basel-based Botnar Foundation, which focuses on issues in child health and has funded the apparatus.

To speed things up, Sinues co-founded the startup “Deep Breath Initiative”, which aims to bring together international research in this field to make it accessible to the wider healthcare system. This startup is supported by the University of Basel with the Innovation Space. A further project is being conducted jointly with the University Hospital Zurich and ETH Zurich, which form part of the Zurich “Exhalomics research consortium”. Its goal is to use breath analysis to diagnose pneumonia and even distinguish its causative agents based on their waste products. If this is achieved, then diagnostic results will become available within 15 minutes – today the wait is 48 hours and can result in serious complications for patients.