Temperature taking – on a tiny scale. 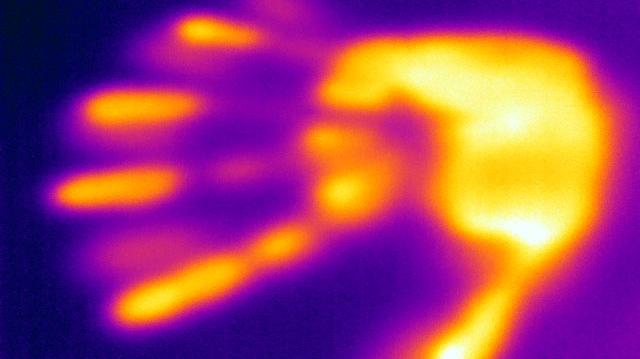 Minute changes in temperature can be used to analyze the growth of bacteria. This technique, known as microcalorimetry, is being applied in various innovative ways by Basel University researchers to aid the development of medical implants, infection diagnostics and food safety testing.

Almost all organisms produce heat – a truth that scientists have long used to investigate metabolic processes. More than 200 years ago, for instance, French chemist Antoine de Lavoisier placed a container holding a guinea pig inside a bucket ﬁlled with ice. Based on the amount of ice melted by the animal’s body heat, he was able to show that breathing is a slow form of combustion.

A similar technique is being used at the University of Basel’s Department of Biomedical Engineering, albeit in a rather more sophisticated form. Instead of guinea pigs, the researchers’ subjects now tend to be bacteria and other microorganisms. What is more, the ice bucket has been replaced with a microcalorimeter – a device able to detect temperature changes in the order of a few thousandths of a degree Centigrade.

The heat produced by the organisms is then used as a measure of bacteria growth. “This method is especially suited to applications where microscopy, conventional microbiology and molecular biology have reached their limits,” explains Dr. Olivier Braissant, who heads the microcalorimetry laboratory.

One of his main research interests is the characterization of a type of bacterial growth known as bioﬁlms. These bioﬁlms occur under certain conditions and are considered to be particularly resistant to antibiotic treatment. If, following an operation, a hip, knee or dental implant develops such a bioﬁlm, the result is intractable infection, often with severe complications. “Our main aim is to identify new materials and coatings for implants and to test whether they can prevent bioﬁlm formation,” says Braissant.

In his microcalorimetry lab, he is testing a number of innovative products for use in medical implants in collaboration with industry partners and hospitals. This involves placing small samples of material in glass ampoules along with bacteria capable of forming a bioﬁlm. For this purpose, Olivier Braissant selects bacteria species that account for a large proportion of hospital-acquired infections, such as Staphylococcus aureus and Staphylococcus epidermidis.

Based on the amount of heat generated inside the microcalorimeter over a period of days, weeks or months, he then gages how successfully the bioﬁlm is colonizing the material being tested. “The great thing about microcalorimetry is that these tests are simple and easy to run without a lot of preparation,” says Braissant. “The only constraint is that specimens have to be small enough to ﬁt inside an ampoule.”

Another advantage of this method is that small amounts of microbes are enough to enable measurements. This is particularly useful when working with slow-growing bacteria such as Mycobacterium tuberculosis, the causative agent of tuberculosis, which causes more than a million deaths world-wide each year. The disease can only be reliably diagnosed by detecting the pathogen in a patient’s sputum – but since the bacterium grows extremely slowly under laboratory conditions, diagnosis by conventional methods takes at least a week. Another month passes before the appropriate antibiotic can be identiﬁed. “Using microcalorimetry, we were able to reduce the waiting time from over a month to one week, as we require only a small amount of the bacterium,” Braissant says, referring to a recently completed project in South Africa.

One problem that has yet to be over-come is the very low capacity of current microcalorimeters compared to conventional diagnostic systems, which can analyze up to 1000 specimens at once. To tackle this issue, several former staff members of the Department of Biomedical Engineering have founded a start-up company and are now working to develop a novel, affordable microcalorimeter that could one day provide enough space for several hundred specimens.

The applications of microcalorimetry are by no means limited to medicine, as evidenced by a study that Braissant conducted in collaboration with Swiss agricultural research institute Agroscope. The institute stores and cultivates bacterial strains traditionally used in cheesemaking that are responsible for the right taste, rind formation and – not least – the holes in cheese. The European Food Safety Authority requires proof that the bacteria in these cultures do not harbor any transferable genes for antibiotic resistance.

Yet, these types of analysis tend to be costly and labor-intensive. “One major complication is that some of these cultures will only grow in milk rather than the usual culture media. It’s almost impossible to isolate the bacteria without inhibiting them, especially once fermentation sets in and the milk starts to thicken,” Braissant explains. This problem does not affect microcalorimeter measurements, however, because the bacterial cultures do not need to be isolated. His analyses conﬁrmed that nearly all starter cultures were free of antibiotic-resistant bacteria.

Researchers from other disciplines are increasingly reaching out to Braissant when their own methods no longer produce results. Accordingly, Braissant has no shortage of projects for his microcalorimetry laboratory: “The history of temperature measurement certainly goes back a long way, but it feels as if it has only just begun in earnest.”

Olivier Braissant is a researcher at the Department of Biomedical Engineering at the University of Basel and heads the microcalorimetry laboratory there.