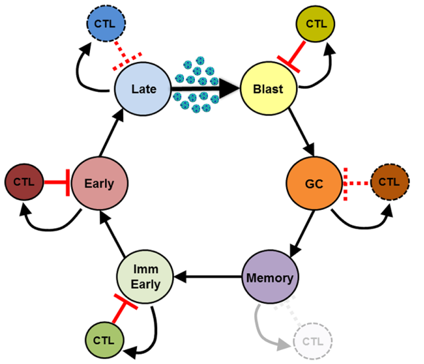 Many years of scientific research have led our collaborators to propose a cycle of replication for the Epstein-Barr virus (EBV) in the human body. Indeed, experimental evidence suggests that the virus takes advantage of the physiological cycle of B cells. We have tested some of the logical consequences of this model using mathematical modelling and computer simulation. We were able to derive consequences concerning the differences in the pathology of EBV infection between individuals in a population of EBV positive persons. It turns out that the differences predicted by the model are actually observed in the human population! This is a strong argument in favor of the validity of the “cyclic pathogen model” of EBV infection. Find out more.